May 23, 2014
On BART, struggled to draft another poem for Like/Share II, a photography-inspiring-poetry art show and event I was invited to participate in by curator Ann Trinca. The event "happens" in June with readings/showings. (Will need to ping my list.) Walked up to Coit Tower after lunch and finished first draft of what's now called "Love poem or apology."

Submitted five poems (four from the book) to 32 poems. According to Duotrope, chances of acceptance are under 1%. So it's really going to boost my average when I get in :D

Submitted three poems to Ancient Paths, though I'm unsure about the fit of my gnostic, deistic, Jewish poems with this "Christian" journal. On the other hand, if this is Christian the way my friend and poet/photographer Ed Aust is, the fit could be perfect.

Submitted four poems to Zyzzyva, a local mag. About 2% acceptance. West Coast focus. Hand delivered it, because why not? I hand delivered a submission last year when they were up on Sutter, but now they've moved one block from my office, in one of the coolest buildings around here, the Mechanics' Institute Library, which is actually a library and has a chess room on the 5th floor. Very cool, old architecture with high halls and one of these: 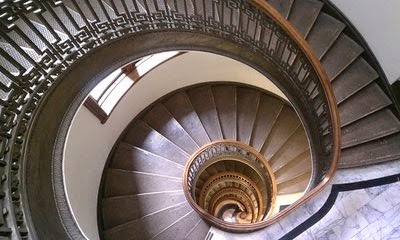 In process of readying the poems for submission today, I made small improvements to about 6 poems in the manuscript. Also started to wonder about 10 or so poems that just don't feel like they want to be submitted. Do they belong in the book? Are they ready? Can they be improved--because at one point I felt they were worth including... Opening the question...

Arranged to take off or work from home on my daughter's second-to-last day of school, so I could attend the poetry slam her teacher is organizing for the kids. Mirabai's been writing some pretty good poems for her age. Her vocabulary is wide and she uses it.

Yesterday, I forgot to mention my post on IMUNURI. The poem "Δ" goes with an image from Like/Share II and is based on a ride I shared with Jillian Banks-Kong when we used to carpool. (I also left a comment or two on IMUNURI for other poets yesterday.)

I am curious to see what poeming I actually do over the long Memorial Day weekend. Hopefully a few drafts at least, and maybe some prep work for the week ahead. Big event coming May 28.

Eek! We should jam on Sunday. I'll send the email now!

Did that. So maybe Sunday will be a jam. Work's light as Memorial Day Weekend kicks off. I'm making hay while the sun shines.
diary journal poeming proces what poem today

January 08, 2018
Sesquipedalophobia, the fear of long words, terrifies its sufferers with the very naming of its diagnosis.
For their sake, in a consciousness-raised behavioral healthcare environment, let’s propose a new name for the malady; e.g., plep.
Read more

October 31, 2017
Another word that, if it were a word, would have given me a handsome score in Words With Friends. Also one of those words which should be a word. As George Carlin said, the concept of chalance exists.
fangle
To fashion something, but not in a pioneering, innovative or iconoclastic way. A product engineer might fangle a kitchen mixer with slightly better blades or a razor that stays sharper a little longer. The thing may be said to be fangled, but certainly not newfangled.
Read more

Had trouble finding the right title. Something about how experience is so concentrated here,
or in any city. Maybe you have an idea of a different title that could work for this poem?

A man shares my bench, lowers his shades, flirts with me; but having lunch is why I’m here. I must keep this custard off my shirt. In the city, look and it appears: toothy skyline, transit or dessert.
I’ve been a tourist nearly twenty years, still looking up at the tops of towers— still amazed at all the sounds to hear— conversing, saxophones, ambulance howls— not commonplace, the cities of earth.
I could wander or I could sit for hours lost in this chaotic summer dream. A woman in a sunflower cowl turns my head right around and then steam billows up from a grate—smells of beer,
moving bodies, iron and chlorine— Gotta get back to work. It’s 1:15