Showing posts from April, 2012
Show all

April 30, 2012
Continuing with this story. I have to warn you though... I only got as far as chapter five plus a general concept of where I might go. Read part one , if you haven't already. 2 Three hours later, I’m three sheets to the wind, camped out in the bar booth, which even now that I’m familiar with it, is as eerie as a swamp from an old horror movie. Since it remains that type of setting and I have made it my home, then I am the creature from the dismal swamp. Truth be known, I’m hoping Charles will come in. He’s been scarce since I told him to fuck off, which is typical. He takes things so personally, asshole that he is, ghost of an asshole that he is.             Night is thinking about taking this ludicrous whore of a town to bed. I can hardly wait. Because with both of them distracted by each other, I might try to sneak home unspotted. To while away the last light, I signal to Enright—that’s the barkeep—for another. Since there are only two other people in the join
Post a Comment
Read more

A poem about surrender and the process behind the form 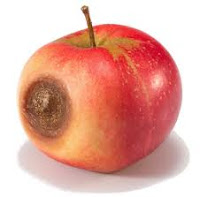 Welcome again, friends. We may return to prose, the ghost of Charles Bukowski and other first chapters later this month, but for now I want to share this poem inspired by 5Rhythms dance, specifically a class I took from Kathy Altman of The Moving Center School .  This is in anticipation of an interview with Lori Saltzman , Kathy's partner, on creativity at the crossroads of movement and writing. What's unique about this poem is the process through which I found it. But first, here's the poem:  "I'll believe it when I relent." I topple to rise up, and I tower to fall; both a yen to start and an urge to surrender. At whose bidding do I cross and re-cross the hall? "I push backwards…I go forwards." —Larry Eigner. "Nothing is true that isn't paradoxical." Kathy Altman says this. I hear it in my gyre. "In a field / I am the absence / of field." —Mark Strand. This cool hardwood floor is t
Post a Comment
Read more

The Ghost of Charles Bukowski, a novel excerpt or a partial tribute 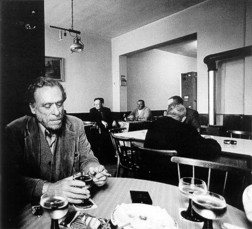 At the end of my freshman year in college, a professor loaned by Love Is a Dog From Hell by Charles Bukowski. The 300+ page book of poetry about horseracing, prostitutes, drunkenness, despair and the rare moment of transcendence makes a strange source for an epiphany, I warrant. But as a 19-year-old who had been carrying a poetry journal for the two years or so prior, that book offered one brilliant illumination and made me forever indebted to the misanthrope poet of Los Angeles. Bukowski just wrote. He didn't wait for a subject; he didn't edit himself or circumscribe his thoughts; he didn't sweat line breaks or unpleasant odors. He wrote what he wanted. That's what Dog from Hell said to me: write what you want. Ever since then, I've thought about my relationship to Bukowski's work, and have dabbled with imaginings about his ghost. I include one of these poems in " Monster Poems ." Recently, I also uncovered a novel concept and first few chapters
Post a Comment
Read more 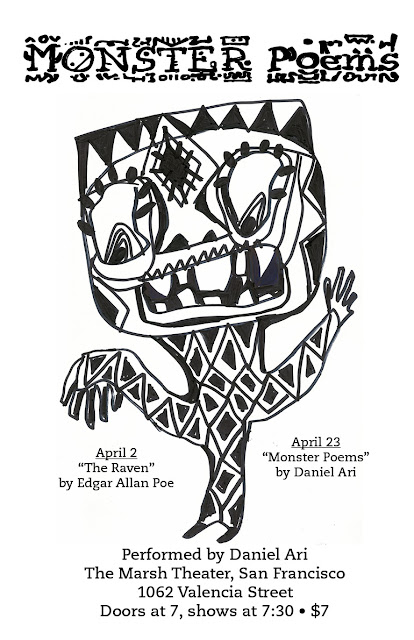 The book is here. If you're in town, meet me at The Marsh, April 23. Or order yours here, now. Suggested donation of $4-7 includes shipping anywhere within the U.S. ﻿ The book is here! "Monster Poems" by Daniel Ari Illustrated by Lauren Ari Get your copy today. Suggested donation $4-7 via PayPal to efflux at sonic.net includes shipping anywhere within the U.S. ﻿
Post a Comment
Read more
More posts