November 15, 2013
Even after watching him smack face first
into countless trees over endless days,
the ape named Ape had still not fully guessed
the depths of his friend George’s naiveté—
not until George’s “Doggie,” Shep traversed

the ancestral passage to the graveyard
of elephants. George continued calling
for Shep at dusk and setting out huge plates
of chow insisting he would be hungry
when he came home. George’s mate Ursula

and Ape both tried to explain what dying
was, but George would open a breadfruit and
shout, “Here, Shep!” Ape was awed at the Living
Saint of Primal Innocence; and he left
to live with his ape tribe. He was afraid

of seeing George laid on his own deathbed.
Meanwhile, George still lives, calling his dog, Shep. 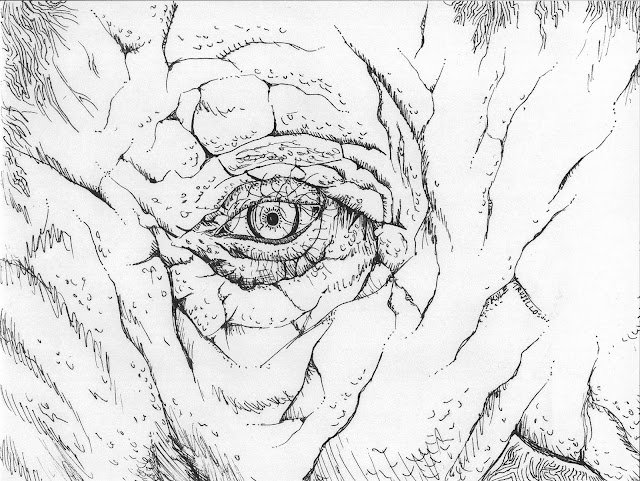 January 08, 2018
Sesquipedalophobia, the fear of long words, terrifies its sufferers with the very naming of its diagnosis.
For their sake, in a consciousness-raised behavioral healthcare environment, let’s propose a new name for the malady; e.g., plep.
Read more

October 31, 2017
Another word that, if it were a word, would have given me a handsome score in Words With Friends. Also one of those words which should be a word. As George Carlin said, the concept of chalance exists.
fangle
To fashion something, but not in a pioneering, innovative or iconoclastic way. A product engineer might fangle a kitchen mixer with slightly better blades or a razor that stays sharper a little longer. The thing may be said to be fangled, but certainly not newfangled.
Read more

Had trouble finding the right title. Something about how experience is so concentrated here,
or in any city. Maybe you have an idea of a different title that could work for this poem?

A man shares my bench, lowers his shades, flirts with me; but having lunch is why I’m here. I must keep this custard off my shirt. In the city, look and it appears: toothy skyline, transit or dessert.
I’ve been a tourist nearly twenty years, still looking up at the tops of towers— still amazed at all the sounds to hear— conversing, saxophones, ambulance howls— not commonplace, the cities of earth.
I could wander or I could sit for hours lost in this chaotic summer dream. A woman in a sunflower cowl turns my head right around and then steam billows up from a grate—smells of beer,
moving bodies, iron and chlorine— Gotta get back to work. It’s 1:15